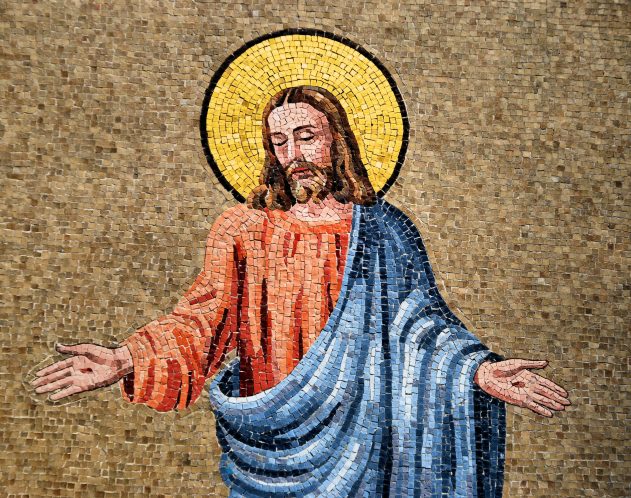 FOR LENT: Study of Jesus Tempted by Satan from Matthew Chapter 4

A Bible Study for Lent Adapted from Faithbuilders Bible Study Guide: The Gospel of Matthew (£12.99) Also for Kindle

4:1-2 Then Jesus was led by the Spirit into the wilderness to be tempted by the devil. After he fasted forty days and forty nights he was famished.

Having been baptised by John, and filled with the Holy Spirit of God, Jesus was immediately led by the Spirit to fast in the wilderness of Judea to “be tempted by the devil”. God’s purpose during this 40 days of fasting and temptation (recalled in our observance of Lent) was for his son to face Satan head on. Satan knew who Christ was, the seed of the woman who would come to destroy him, and so in various ways attempted to cause Jesus to fail in his mission.The similar fasts of Moses and Elijah merely pointed forward to this more important event. Jesus deliberately starved his natural life in order to concentrate on that which is spiritual. This is the principle of fasting. However, Christians are not obliged to fast at Lent; perhaps like Jesus we should fast only when we are led by the Spirit of God. In any case, always be sensible if you choose in any way to fast for Lent, for ill-advised fasting leads only to health problems, not spiritual blessing!
We may find it difficult to understand how Christ was tempted, for whereas we are sinful and prone to fall into temptation, Christ was without sin. It is because our Lord Jesus Christ overcame all sin and went to the cross spotless for us that we can be forgiven. His word to believers who fall into sin is “if we confess our sins, he is faithful and just to forgive us our sins and to cleanse us from all unrighteousness.” This cleansing makes us right with God again, just as fully as when we were made right with God initially by receiving Christ as Saviour and Lord. Moreover, Jesus Christ has the power to enable us to overcome temptations—even those which we were once helpless to resist—but only as we recognise that it is not we who can resist temptation; the living Christ within us will strengthen and enable us to share in his victory over sin.

4:3 The tempter came and said to him, “If you are the Son of God, command these stones to become bread.”

Another name is used for the devil in this verse, describing his nature as “the tempter.” He is the one who opposes and resists all that is of God or is godly. Satan’s tempting of Christ was more than a temptation of his weak human nature. Satan primarily tempted Christ’s divinity. “If you are the Son of God”, he says. The devil knew very well that Jesus was the Son of God, and yet rebelliously resisted and opposed him. The devil is a liar from the beginning, and since it appears that he is confident of his own power, then he must be lying to himself also. To ask God for a demonstration of his power to prove that he exists is to test him in a sinful way. To allure a hungry man with food is to appeal to human weakness. Yet on both points of temptation, Jesus was victorious. The sin of Adam and Eve was to obey Satan rather than God; but Jesus remained faithful and obedient to his Father.

4:4 But he answered, “It is written, ‘Man does not live by bread alone, but by every word that comes from the mouth of God.’ “

Jesus used the word of God to good effect against the devil. The same scriptures which Satan twisted to tempt Jesus’ deity, Christ uses correctly to justify his obedience to God and overcome the devil. The human soul needs to be fed by something more than bread (which only feeds the body). Although the human body cannot live without the soul, the human soul will live on eternally even without the body. Not only during Lent but at all times, the word of God feeds the soul, and gives it life. That is why personal and private Bible reading remains an important discipline. It is this word which has brought us life, keeps us in life, and preserves us to eternal life. And it is this same word which Jesus successfully used to resist temptation.

4:5 Then the devil took him to the holy city, had him stand on the highest point of the temple.

The power of the devil may here be seen. By his power he bodily took Jesus, without the need of time or transport, to the highest point of the temple in Jerusalem. It is perhaps strange that Jesus allowed this to be done to him, but he wished to face Satan fully in all his evil power for our sakes. Christ’s was no half-hearted battle or mock war. The word of God does not diminish the power of our enemy, but it assures us that the infinitely greater power of God is within us (1 John 4:4).

4:6 And said to him, “If you are the Son of God, throw yourself down. For it is written, ‘He will command his angels concerning you’ and ‘with their hands they will lift you up, so that you will not strike your foot against a stone.’ “

For the second time the devil tempts Christ’s divinity. “If you are the Son of God,” says Satan, “then prove your indestructability”. Throw yourself down, and experience the fulfilment of scripture; God will not allow you to be hurt. But Christ had voluntarily humbled himself to become a servant and was committed to doing God’s will, not forcing God’s hand with impetuous actions of his own. So once again the lies of Satan fell on deaf ears. Someone has said that Christ was such a stranger to evil, and the ways of the devil, that he could pass sin by on the street without so much as a familiar look of recognition; for he knew no sin.

Jesus knew that the devil was asking him to test God, and he refused to do so in obedience to God’s word, which he once again used like a sword to defeat Satan’s purposes. The Bible says that believers also have access to this “sword of the spirit which is the word of God” (Eph. 6:17) when we are tempted, and that we can use it to overcome all the works of the devil. Since Christ has overcome, we too can overcome in union with him (Rev. 12:11).

4:8–9. Again, the devil took him to a very high mountain, and showed him all the kingdoms of the world and their grandeur. And he said to him, “I will give you all these things if you throw yourself to the ground and worship me.”

In a similar way to that employed in verse five, the devil transported Jesus to a very high mountain and in a single instant showed him all the kingdoms of the world and their glory. This may at first sight be regarded as a temptation to the pride of the human heart, but since Christ was absolutely without pride, such a temptation would have proved useless. Rather, the tempting is again of Christ’s divinity. All that glory which man presumes to possess was being offered to God, who himself should be man’s glory. Offering the creator his own world, on condition of his abdicating his throne and bowing down to Satan, was certainly tempting his godhead, and is reminiscent of that earlier sin which Satan committed in heaven, when he sought to take God’s place upon his throne.

On this occasion, Jesus ordered Satan away, upholding the very first commandment, to worship God and have no other gods before him.

4:11 Then the devil left him, and angels came and began ministering to his needs.

The hollowness of the devil’s conceit is now revealed; for although he had offered Christ all the world’s glory, and put himself forward as his superior, yet he has no choice but to obey the command of Jesus and leave. Christ’s victory over Satan is overwhelming, but it is by no means complete. Jesus could no doubt carry on defeating the devil in this way forevermore, even as one day he shall order him to be cast into the lake of fire. But it was in order to save us that he confronted Satan in this way, for only by conquering him who had the power of death could Christ release all those who were held captive by the devil. So Christ is now ready to leave the desert and continue his victorious march to the cross (Heb. 2:14). That is the place of Christ’s ultimate victory, and it is the place of ours.
But first, after the physical rigours of fasting in the desert, and the expending of spiritual power in resisting Satan, Christ receives the ministry of angels to strengthen and renew him. It is thought by some that the angels brought food and water, as they did in the case of Elijah, but perhaps they also brought a more spiritual ministry, resulting in the supernatural quickening of Christ’s mind and body. If giving up certain food/drink has been part of your Lent journey, pause to think how you might end Lent with a fellowship meal, with those you love, and with those who love God.