HEALING BY A MERE TOUCH AS A CHRISTIAN CONCEPT by Dr Pieter J. Lalleman 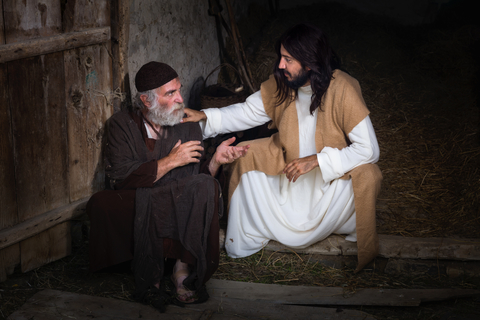 On the basis of Otto Weinreich’s book Antike Heilungswunder (1909), it is generally thought that the idea that a simple touch can have healing power originated with the Greeks. The present essay argues, however, that this concept is proper to the Gospels and to texts dependent on them. There are no Greek cases of such healings before the rise of Christianity. Before Christ, the concept of healing by a mere touch occurs only in one isolated case, viz. the Genesis Apocryphon from Qumran.

The idea that a touch of Christ is enough to accomplish a healing miracle or a resurrection from the death occurs several times in the Gospels. In Acts and in the Apocryphal Acts the idea is widened to include the apostle as the beneficent actor.[1] In the Acts of John, for instance, a short episode relates that in Ephesus many brothers were healed by merely touching John the Apostle (c. 62). This story shares with two synoptic accounts (Mk. 6:56//Mt. 14:36; Mk. 5:27//Mt. 9:20-21//Lk. 8:44) the key words ‘to touch’ (ἁπτομαι) and ‘clothes’ (ἱματία). Acts 19:11-12 likewise contains a brief note on healing which states that people in Ephesus touched the apostle Paul. One cannot help thinking that the Acts of John consciously lets John perform his miracles in a way that resembles the activities of Paul in Ephesus. What most interests us here is that the author of the Acts of John knows and adopts the specific use of the word ἁπτομαι from the Christian tradition, but composes his story without overt references to the Gospels and the Lukan Acts.

A similar case occurs in another of the Apocryphal Acts, those of Peter. An apparently polemical story in Acts of Peter 28 contrasts the Christian way of healing with pagan methods, arguing that despite his magical powers (magia) Simon the magician is unable to raise a young man. Three times Simon lifts the boy’s head, but with no lasting result. Afterwards Peter merely touches the boy (tangens Petrus pueri latus dixit: surge. Et surgens puer…) and achieves the desired result.

The origin of the idea that a mere touch of the holy person or some of his belongings has healing power deserves further treatment. I do not here deal with other (no doubt more or less related) aspects of this idea such as the laying on of hands for other purposes, like the transfer of the Spirit or initiation, nor with later occurrences of the motif in Islam. Neither am I ignorant of the fact that the concept of a healing touch is part of the conviction that the hand conveys power, itself an element of the idea of contactus, the transfer of power by physical contact.[2] This concept comes to the fore in many cultures in the idea of the effectiveness of skin-to-skin contact (συνανάχρωσις).[3] What I want to show is that the idea of the healing power of a mere touch is characteristic of Jewish-Christian texts. The descriptions of healing by a mere touch in Christian texts have in common that the actual physical contact is so brief as to leave no room for any manipulations. This form of healing is prefigured in pre-Christian Judaism[4] and comes to the open for the first time in

Christian texts. This claim is independent of whether or not the phrase ‘lay hands upon’ is used, and applies both to the situation in which the healer (Christ, apostle) touches the sick and to the situation in which the reverse happens, namely that the patient touches the one who can heal him/her: both first appear in the Gospels.[5] I would argue that, in contrast, Greek and Hellenistic texts about healing describe the physical contact between healer and patient in such a way that they imply or at least leave room for ‘medical’ activities or for the occurrence of magical practices.

The first part of Otto Weinreich’s monograph Antike Heilungswunder is devoted to miracles attributed to the hands of the deities.[6] Weinreich suggests that the therapeutic touch without concomitant activity frequently appears in Classical sources.[7] Exactly this, in my opinion, is not the case: none of the sources he refers to contains this idea. Nevertheless, later scholars usually refer to Weinreich’s book as authoritative and we are led to think that the idea of a healing touch is very common in Greek and Hellenistic sources in pre-Christian times.[8]

When we take an independent look at the evidence, we frequently find the lifting up of the hand or the touching of a woman that results in conception and/or safe delivery, but such activities are not real healings by touch. The myths about Zeus touching Io also concern pregnancy and childbirth.[9] Asclepius most often heals by means of dreams granted to those who slept in his temple, either curing them directly or revealing an adequate therapy; also frequent is the raising of the (right) hand of the deity.[10] Whenever there is physical contact, the god performs a specified medical operation, such as the opening of an eye in order to put medicine in it.

A few oft-quoted cases can be discussed here separately. Thus there is the woman who touched Sulla (Plutarch, Sulla 35). This is not an instance of healing because the woman is not ill; she just wants to receive some happiness from the man she touches. Besides, she takes something from Sulla’s clothing. Another touch, that of the clothes of Athenion by the people of Athens (Athenaeus, Dipnosoph 5.49 212-13) has just as little to do with sickness and healing. When Seneca mentions the touch of a medical doctor (De beneficiis 6.16.2), he never thinks of something miraculous but just of the doctor’s normal work. The wish to touch Alexander or his clothes (Arrian, Anabasis 6.13.3) is not connected with sickness or healing although this, like the former cases, is referred to by theologians dealing with the miracles of Christ. The same holds, to mention one more case, for the words of Plutarch (Quaest. conv. 5.7.1).

Weinreich devotes a separate section to those sick people who reach out to the healer, as indeed also happens in the Gospels.[11] But critical reading shows that he only has one case in which the patient touches not an artefact but a human being, viz. the emperor Hadrian. Notice, of course, that this story dates from the Christian era.

In the material collected by Weinreich, the word aJptomai occurs only twice. One of these cases is Antoninus Liberalis 6.7, where Apollo changes Cragaleus into stone.[12] The other is the Apellas inscription from Epidauros (IG IV2 126, second century C.E.) which, when read in its entirety, shows that the divine touch is only one of the many elements of the therapy that the god prescribes. It takes thirty-two long lines to describe the food, the baths and the other physical exercises of M. Julius Apellas. Lines 22-24 tell of the touch, which is not followed by immediate result: ‘Those things (happened) in nine days after I arrived. He also touched my right hand and my breast. And when on the next day I was offering,…’[13] More recent finds do not render more evidence. In the rare cases in which the word occurs in the Magical Papyri, it has a completely different meaning.[14] Furthermore, these papyri mainly describe complicated procedures in which the touch can only play a marginal role.

This brings us to another alleged parallel to the healing touch, viz. the healing of two people by the new emperor Vespasian in Alexandria. In all three accounts of the incident (Tacitus, Histories 4.81; Dio Cassius 65.8; Suetonius, Vespasianus 7 [De vita caesarum VIII]), it is explicitly said that there was physical contact between the new emperor and the two men. But something more happened than just a touch: Vespasian used spittle for the eyes of a blind man and set his heel on a person with a lame leg,[15] procedures not exactly parallel to a mere touch.[16]

It would seem that the Greek and Hellenistic material collected by Weinreich and later scholars contains no pre-Christian parallels to the idea of ‘to touch for healing’.[17] The idea that a mere touch of somebody (Christ or an apostle) brings recovery does not occur in Greek sources.[18] We conclude, then, that it is improbable that Greek or Hellenistic stories about healing by touch were taken over by the early church and attributed to Jesus.

Among the Semitic peoples, the healing touch hardly occurs.[19] The idea of laying on of hands in connection with prayer occurs in the Qumran Genesis Apocryphon (1Q20) col. 20.22, 29)[20] but it is not otherwise attested in Judaism either before or after the time of Jesus. Neither is it found among the Romans.[21] The Rigveda contains several allusions to a healing hand (2.33.7, 10.60.12, 10.137.7), but these afford no insight into the intended practices, so that they cannot be of much value.

I would argue for Christian influence on the story of a raising from the death in Philostratus’ Life of Apollonius 4.45, the only time Apollonius is said to heal by touching.[22] Apollonius meets a funeral procession and makes it halt. Whereas the spectators expect an

appropriate speech, the holy man addresses the dead girl and touches her: ‘he,…merely touching her and whispering in secret some spell over her, at once woke up the maiden from her seeming death’.[23] (Note, moreover, the author’s additional remark that the girl was not really dead.)

It appears that the miracles of healing by a mere touch of his hand ascribed to Jesus are unique.[24] Previous research has insufficiently taken note of this, as have commentaries on the gospel stories. The texts in the Book of Kings and the Genesis Apocryphon referred to above are the only precursors to them. Thus ἁπτομαι in the sense of ‘to touch-for-healing’ is really a word from the Christian vocabulary.[25] It would seem that the practice described goes back on Jesus himself, who broke the barriers of uncleanness reaching out to the sick and allowing them to touch him.